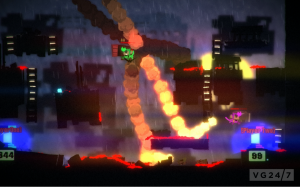 When I read the latest Unity Newsletter  I saw the feature of “Gun Monkeys” by Size Five Studios and clicked on the link to the game’s trailer. Wow! That looked great and was multiplayer realtime action. First I thought “damn!” this game would have been perfect for Photon Cloud, so I mailed with Dan Marshall from Size Five to find out how they built the multiplayer part. Dan swiftly replied and here is what he wrote back:

In the game you setting up your very own Power Company, and using your home PC to send monkeys into the future to collect the abundant, free “Power Cubes” that litter the post-apocalyptic landscape. Sadly, there are other Power Companies out there doing the exact same rotten thing, so you’ll have to protect your monkeys, and guide them to victory.

Beta testing will begin soon. If you’re like to be involved, keep an eye on http://www.twitter.com/danthat