In the last two years we introduced new products to our portfolio to better tackle the different challenges in multiplayer development. But with the growing portfolio it became more difficult for our customers to understand the differences between them.

We decided to streamline our portfolio and focus on less products: 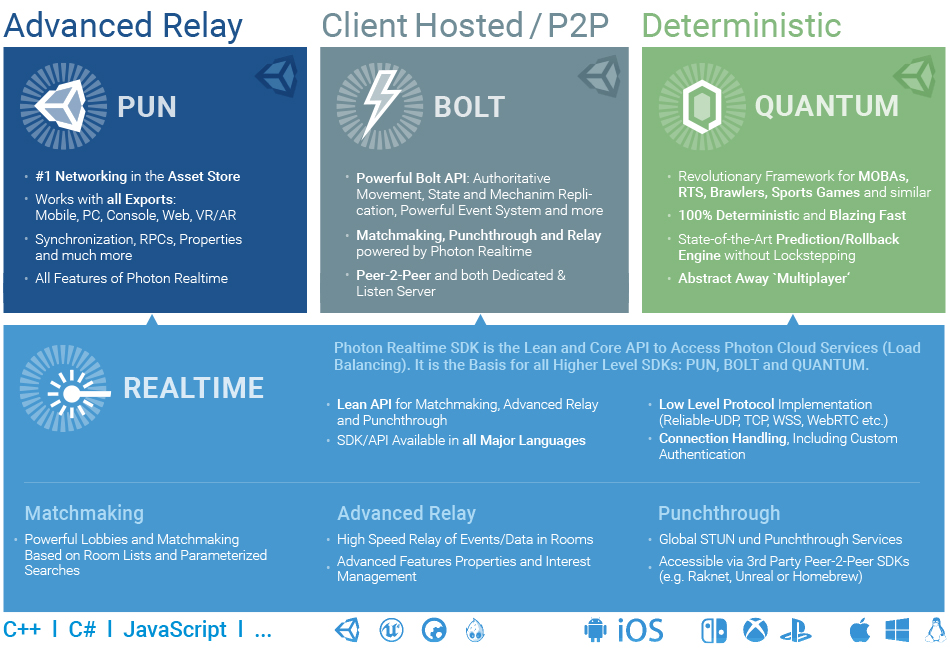 But no rush: Photon protocol support for existing TrueSync or Thunder customers will continue, but we highly encourage customers to plan a migration to our other existing and new products.

Photon TrueSync and Quantum are both deterministic products and the initial idea was that TrueSync has a focus on ease of use (Unity style/approach using game-objects and behaviour scripts), while Quantum is all about high performance and support for fast-paced action and sports games.

In the past months it became obvious that Quantum is the next evolutionary step for us:

Major Quantum parts came from an acquisition of a technology that was developed over the period of several years. This was then fused with TrueSync.

Customers who are actively using TrueSync can continue doing so, because the Photon transport protocols and relay servers will continue to support it for the time being. While there is no rush to change from TrueSync to Quantum, we encourage you to discuss the advantages of Quantum with us and to plan the migration to its higher performance and future proof API.

With Thunder our mission was to provide the best cloud service for Unity’s UNET by leveraging Photon Cloud’s proven matchmaking, relay and punch-through service. Technically Thunder is a shell around the existing UNET – so in its core Thunder relies on Unity driving UNET forward.

We still believe the Thunder idea is good, but the development of UNET (and the HLAPI in particular) seems stalled and not driven forward by the Unity team. This was unexpected and so we recommend all Thunder customers to switch to Photon Bolt or even PUN.

The current quality of UNET and low market demand made us decide to cease any further development of Thunder. If you are actively using Thunder, you can still do so, but we will not provide any updates.

Please look into Bolt which is delivering on the Thunder promise and superior to UNET in most aspects (see the comparison table below). We offer source code access for selected Studios well.