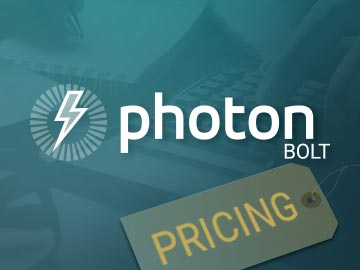 “On coming out of Beta, Photon have now decided that not only relayed clients but also fully peer-peer connected players will use up CCU allowances, which the developer has to pay for. So one of the main benefits that Bolt used to have, i.e. no server costs, has been snatched away.”

The above quote is a review about Photon Bolt by user psychicsoftware and published in the Asset Store. So far so good, but its headline is a real punch-in-the-face for us: “Shameless money-grab”. It is easy to guess that we completely disagree, but it seems that some people consider Photon Bolt’s pricing as inappropriate or even “shameless”.

The main reason behind this negative view is very likely that “fully peer-peer connected players will use up CCU allowances”. Yes, that is correct and we have discussed a lot if there is a better pricing option for us. You might think “hey, simply lower your pricing or change it, so p2p connected players are not counted against CCU allowances”, but here are the reasons why this is not really an option:

We want to offer future-proof products – not falling stars

You invest a lot of time and money in developing a great game and we want to be the partner you can rely on. Therefore we continuously update and improve Bolt for you. Not only this year, but also next year and the year after, and … you get it.

We are in the networking engine business since 2004 and we know the numbers: with e.g. a $100 one-off payment you cannot build-up a sustainable business, so we needed to change the Bolt pricing in order to provide you a product with long-term reliability. You should expect nothing less from a product in order to protect your own work.

There have been popping up networking packages in the Asset Store from time to time that charge only once and you can use them forever, but while those packages are slowly abandoned, Photon is stronger than ever and, most important, battle-proven by actually launched and successful games.

Ok, that is something that you might believe or not, but this is hopefully a convincing argument: PUN costs the same as Bolt and PUN is a successful product since years: if the pricing would be an issue for our customers, we would be in trouble and you would likely have heard or read about it.

Interestingly, when our customers are becoming successful with their games and their CCUs are growing to +3,000 and more they usually want to switch to Photon Enterprise to get e.g. priority support, as they are generating significant revenues.

Although Photon Enterprise costs them more per CCU, they understand the value of Photon: they can fully concentrate on improving their game to further grow their revenues while Photon takes care of devops, availability and scalability.

Often people starkly misjudge the amount of CCU needed. Let me give you an example:

That means your game must have been installed on at least 400,000 devices in order to generate 1,000 CCU. Realistically your game is rather installed on about 600k-1million devices (actual value is depending on your user retention rate):
you won’t have any issues paying the $185 for Photon 1,000 CCU in case your game has at least some sort of monetization.

600k-1million installs and $185/month for Photon which includes a global cloud. We think that is an extremely fair deal especially as we include loads of traffic in our plans. The included traffic is calculated to be sufficient for even fast action games so you do not have to pay any overages. In the 1,000 CCU plan from the above example you get 3TB data traffic included which boils down to $0.05 per GB. Unity charges $0.49/GB which is nearly 10x more. That’s why we think our pricing is likely the lowest.

The general idea behind our pricing is to provide you a ‘worry-free’ path for your game’s life-cycle:
a) Pre-launch phase – Bolt’s included 100 CCU are enough for developing and testing your game. Or for playing around. No obligations, no additional costs.

b) Launch-phase – if you want to launch your game we recommend to choose a Photon plan with 500 CCU as it features ‘CCU burst’. It means that you can exceed your included CCU allowance and no user is blocked out from your game. We allow you two days – often much more – to upgrade your plan. That allows you to start with a small plan that you can upgrade whenever needed. No risk and predictable costs.

c) After-launch phase – in case your game is performing better you can upgrade anytime and you won’t loose any tracktion as Photon scales seamlessly. You pay only what you actually need.

d) End-of-lifecyle – in case your game is not performing as you hoped or your game reaches the end of its life-cycle you can simply downgrade to the free plan or choose the 100 CCU plan which is enough for most games anyway.

We are not Steam

Sometimes we are compared to Steam and their “free” Steamworks API. As you have to hand them over 30% of your revenue it is not really a free service and Steam can use the revenues to cover its costs for Steamworks. If you want to use Bolt with Steamworks we still charge per CCU as we cannot cross-subsidize. If you use Photon Bolt you have the huge advantage that you can port your game to other platforms including consoles. If you do not need that: Bolt still is a great networking engine.

Our advice: choose the technology which you like most and go for it.