We nearly fell off our office chairs when watching this video by Google introducing ‘A new way to multitask’. As it was April 1st it is apparently an April’s Fool joke and it is a good one, but at second 42 two Photon powered games are featured in this video: Begone by Nplay and WGT by World Golf Tour.

It is hard to believe that albeit there are tons of games in the Chrome Web Store, Google actually chose two Photon powered games. Crazy. But cool. 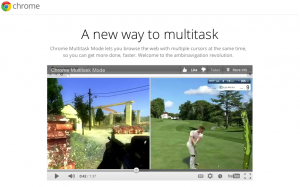