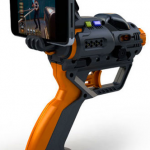 … ok, ok, not really, but at least indirectly by featuring the AppTag Laser Gun that “turns iPhones and Androids into augmented reality laser tag gun sights”, says Engadget or  brings “first person shooter gaming for the real world” to quote Hex3, the creator of the AppTag.

The whole project started with a successful funding campaign on Kickstarter and while Hex3 made the gun the guys from Fuzzy Logic did the AppTag Multiplayer game on top of Photon Cloud.

You can order your AppTag Laser Gun here. The AppTag Multiplayer app for iPhone can be downloaded here and for Android here.